I wrote and submitted my response to his position. So far, it hasn’t been published in El Nuevo Dia, so I decided to publish it on my blog. 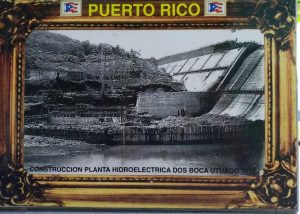 I don’t understand what you mean Mr. Gaya. I live near Lago Dos Bocas where its reservoir and hydroelectric system were built to promote agriculture and supply electricity to the center of the island. Before there were telephones in the neighborhood (in the 1980s), we used to go down to the plant to report breakdowns. There was no guard or gate. We’d walk into a big, clean space with red-painted pipes and yell over the noise of the turbines. The water from the reservoir supplies the super aqueduct that distributes water to several towns on the north coast of the country. I don’t know where the electricity from the plant goes. I have been told that it is supplementary… but it does not supply my neighborhood. We waited eight months to have electricity after Maria. This area resource is not for locals or a source of income. I don’t see the northern towns dredging the reservoir as they need to do.

I think yes, Mr. Gaya, we should establish the regional grids, but leave the resources where they are. And gravity to shore? What does that mean? The sea provides many resources for the coastal area…even electricity.