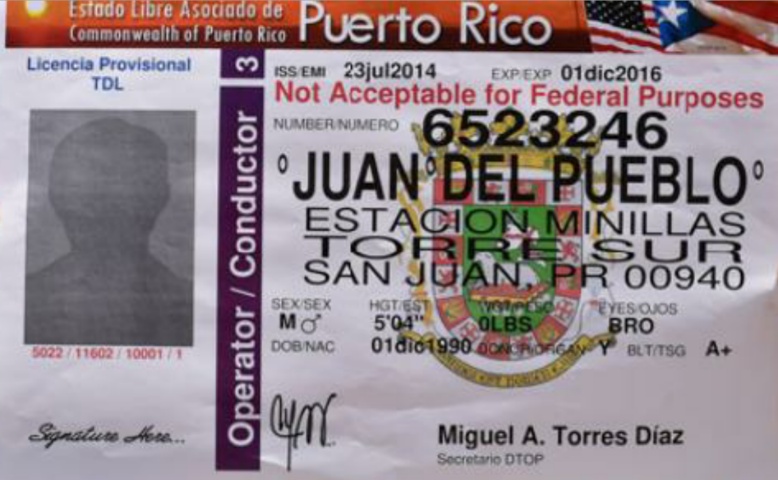 In November 2019 it was reported that CVS did not accept a Purdue student’s Puerto Rico license as an ID to buy cold medicine. The employee said he needed a valid US issued license. https://www.theindychannel.com/news/working-for-you/purdue-students-puerto-rican-id-not-accepted-to-buy-cold-medicine?fbclid=IwAR0X92xlsl5the5_P-SWCSayZdwh1XWs38QOJaD1UlCUsB0cjXicz8Ai_0g

It happened again a few days ago when a NYU student showed her ID to get into a lower east side bar. The bouncer said the license looked invalid and asked why she didn’t have a passport.https://nyunews.com/news/2020/03/02-puerto-rican-identification-rejected-bar?fbclid=IwAR0eRj2cWc5mfLTK2eEQylEFmENTMyM4d9qx-XqPzsLFTB6bR2ZWSWLeaqA

Aside from that bar, this situation has happened in many bars all over the United States.

I have had a license since I moved to Puerto Rico in 1984 and never had a problem until recently.

In today’s environment, racial discrimination and ignorance is certainly connected with this issue. Even some senators and airline employees seem unaware that Puerto Rico is part of the United States and that Puerto Ricans are US citizens.

Many of these cases are due to software programs that don’t include Puerto Rico. If it’s not on the list, then the bouncer or cashier can’t deal with it. I’ve often tried to buy something online and then find that Puerto Rico isn’t listed on the drop down menu.

After my problem at Target, I called my non-voting representative in Congress, Jennifer Gonzalez. I called her office in both San Juan and Washington DC. https://gonzalez-colon.house.gov/ They seemed to think that this wasn’t an issue for her and sounded perplexed that I would even call. As the Resident Commissioner in the US Congress, I think this is just the kind of issue that should concern her. The people of the United States need to learn about Puerto Rico and its citizens and the software “giants” need to include Puerto Rico in their hardware. If she isn’t the person to educate the public, then who is?

Personally I think Puerto Rico should file a class-action suit against the tech companies who have omitted our license from their scanners….but what do I know?

A Tale of Two Viruses